It's a look we've seen many times: a Genoese with a puzzled (perplesso) expression, wondering how we could be so oblivious to something so obvious to a local.

In this case, it was on the face of our generous friend Nicola, who offered a ride to the doctor's appointment we wrote about recently.  (Perhaps he was taking pity on me!)

"Oh please, am I supposed to be dressed formally for visiting the doctor in Italy?!"

"Of course not," he replies, his puzzled expression now transforming into full-fledged bewilderment. "You'll want a jacket if I'm giving you a ride!" He then points to his motorcycle, and the second helmet waiting on the seat.

As the girls' posted a month ago, scooters and motorcycles are the primary form of transportation in Genoa. With the small, steep and winding streets, lack of parking (which is why we don't have a car), and limited public transit (including one of the world's smallest subway systems, consisting of a single 8-station line), Genoa is sometimes called the "European Capital of Scooters." So, it shouldn't have been a surprise that "a ride" meant riding on the back of a motorcycle. (At least in this case it was a comfortable Triumph Bonneville, and not one of the thousands of ancient Vespas zipping along Genoa roads and alleyways.) 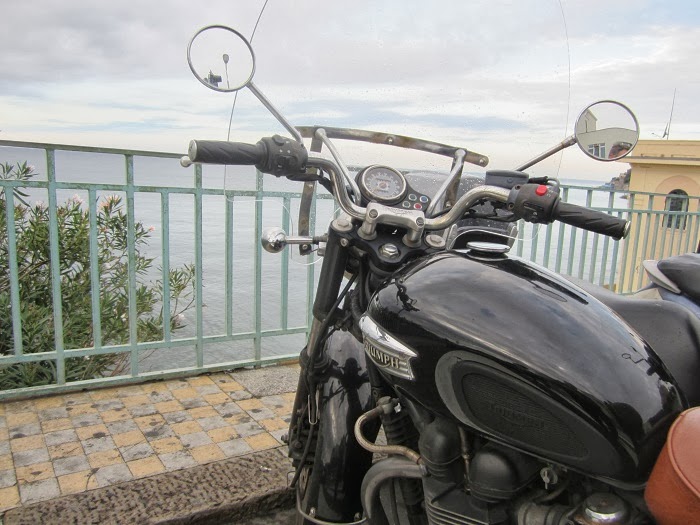 With jacket retrieved and helmet secured, a fantastic ride followed -- winding our way through the city and along the shoreline. Thankfully, there was only one other puzzled query from Nicola. At the first stoplight he turned around with a wry smile to comment, "So, I gather you haven't done this much.  It would help if you leaned with me on the turns, instead of the other way!"