Northern Italy has a tradition of a late-Winter break,  “White Week” (Settimana Bianca): so named because the intent is to allow for snow-related activities in the mountains. This is similar to “Ski Week” in Northern California, although in Italy it feels almost compulsory that you use the week to practice your winter sports. We were happy to oblige, at least for a White Weekend with our friends.

As is typically the case with our blog, we’ll bypass the challenges (e.g., the dyspeptic car rides through the winding mountain roads; the Austrian-influenced “all-animal-fat, all-the-time” food theme; the near whiteout conditions on day 2 of skiing) and get straight to the highlights! In fact, thanks to the grandeur of the Dolomiti, we can just let the images speak for us:

We also made a side trip to see a distant cousin in Bolzano (the capital city of the province of South Tyrol in northern Italy).  By “distant” we mean the 5,300 year-old glacier mummy Otzi, with whom we share the G Haplogroup (in DNA speak). Bolzano has a remarkable interactive museum which is home to Otzi and the many Neolithic artifacts he carried with him. Seeing Otzi in his high-tech preservation chamber was a bit creepy, but both girls offered a “Hi, cousin!” through the eight-centimetre-thick bullet-proof glass.

We were also lucky enough to be in Bolzano during their local Carnevale celebration, and the good luck included the girls successfully answering a series of riddles about the traditional costumes and characters. 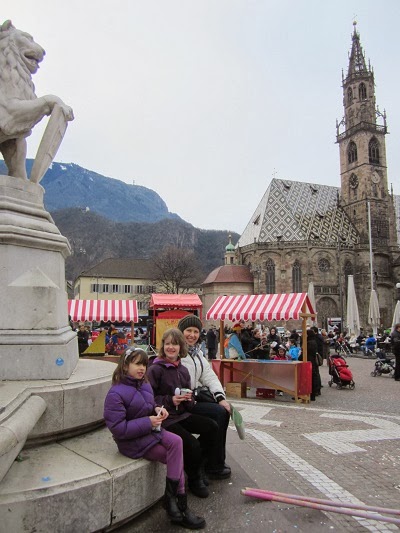 We carried that good fortune through the journey back to Genoa, where the celebrations will continue this month - with two birthdays and a parade of visitors!